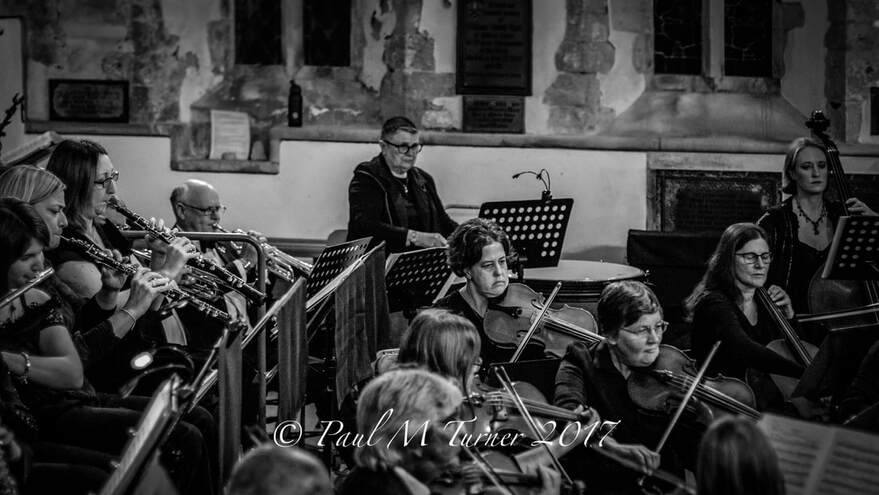 AN AFTERNOON  AT THE OPERA
​​The New Forest Orchestra  presented   “An Afternoon at the Opera” at 3.30pm on Sunday 27th November at Ballard School.  The Concert featured Overtures and Suites from popular Operas plus familiar Arias.

The Concert started with the Overture to Humperdinck’s Fairy Tale Opera “Hansel and Gretel”.  At the beginning the Horn Quartet play the delightful and famous “Evening Prayer” before the orchestra take over with themes representing the Dew Fairy, the witch, the children brought back to life, before the Evening Prayer theme returns in a peaceful  conclusion.

Arias sung by local Soprano Sally Prince included Rusalka’s “ Song to the Moon” and the delightful “O mio babbino caro” from Puccini’s Gianni Schicchi”.  Sally was joined by mezzo-soprano Victoria Hopkins   (who also plays the Horn in the Orchestra when not singing)  for the famous “Flower Duet” and Offenbach’s “Barcarolle”.

Finally a trip to Seville for a Suite from Bizet’s Carmen, included  Sally singing the famous Habanera.   The concert was rounded off by the stirring “Barber of Seville” Overture by Rossini. 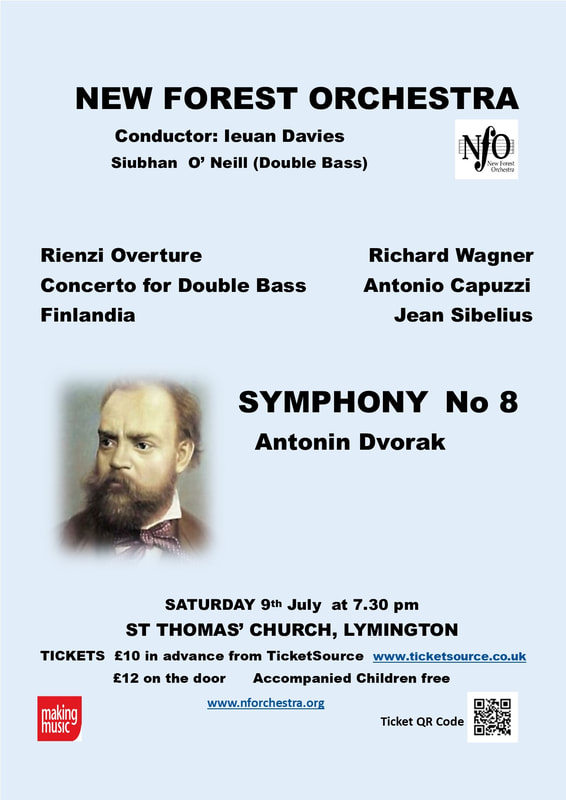 ​We returned to St Thomas' Church for the first time since the Pandemic.

Dvorak's Eighth Symphony brims with one gorgeous melody  after another. 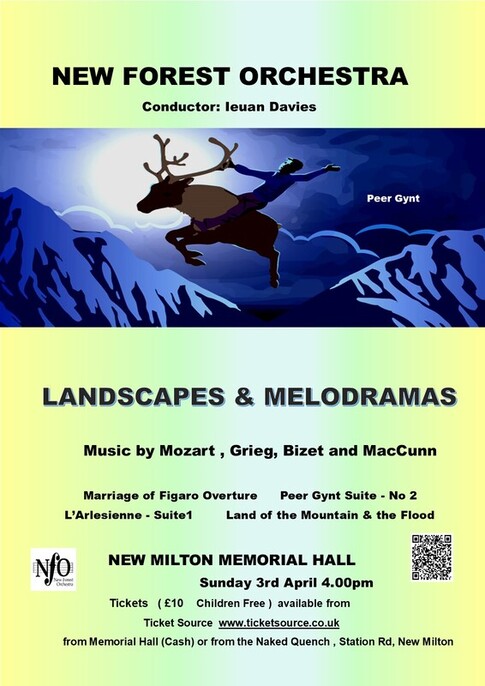 SUNDAY  3rd    APRIL
We started in Vienna with Mozart's  "Marriage of Figaro" Overture.

Grieg' s evocative music for the play "Peer Gynt" takes us from Norway to the north coast of Africa before returning via a tempestuous sea voyage to his homeland after many years. Solveig, the girl he left behind many years before, sings a song of forgiveness.

Bizet's score for the play L'Arlesienne has long outlasted the stage version.  The tragic story of a French youth and his fateful love for a girl from the local town of Arles pulls at the heartstrings.

Finally MacCunn's vivid evocation of the mountains and scenery of Scotland rounded off the Concert.
​CONCERT at 3pm on SUNDAY 5 DECEMBER 2021

It was lovely to be back in front of an Audience at the Memorial Centre in New Milton.
The concert started with a Fanfare  by our Horn section : The Earl of Oxford's March .  Extracts from two Mozart Serenades followed.
​Elgar's sublime "Serenade for Strings" was played to a hushed audience.  It was very gratifying that afterwards a few Wind players said how moved they had been - especially in  the slow Movement.  We don't often hear that as amateur players.   The "Strauss Serenade for 13 Wind Instruments" followed - played with gusto at times - interspersed with some lovely lyrical playing.
Finally we came together for Haydn Symphony 104 - his last.  It was such a joy to be joining forces again.  The excitement was palpable - especially in the last movement which took off at break-neck speed.
​

​THE CONCERT THAT NEVER WAS ! 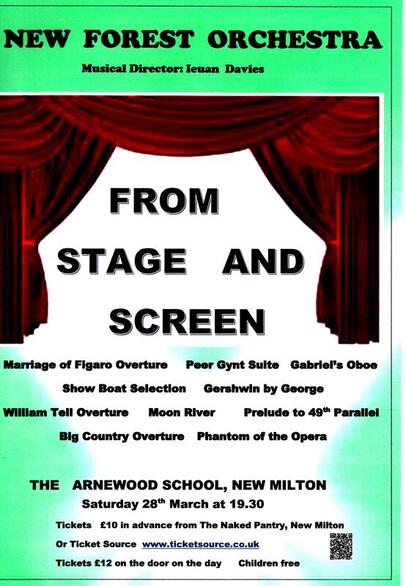 As we all know,  Covid changed  the world  - and we are left only with this poster as a souvenir of the concert that never was.

Click here for details of our previous Concerts and Events.
​