THE MOST WONDERFUL TIME OF THE YEAR
Saturday 7 December
All Saints' Church, Milford on Sea

We returned to All Saints' Church in Milford on Sea for a very special programme filled with festive favourites, including:
Tchaikovsky: Nutcracker Suite
Mozart: Exultate Jubilate  (Sally Prince - Soprano)
Vaughan-Williams: Fantasia on Christmas Carols (Alan Ford - Baritone)
A Musicological Journey through the Twelve Days of Christmas
Rimsky-Korsakov: Dance of the Tumblers
…and more! 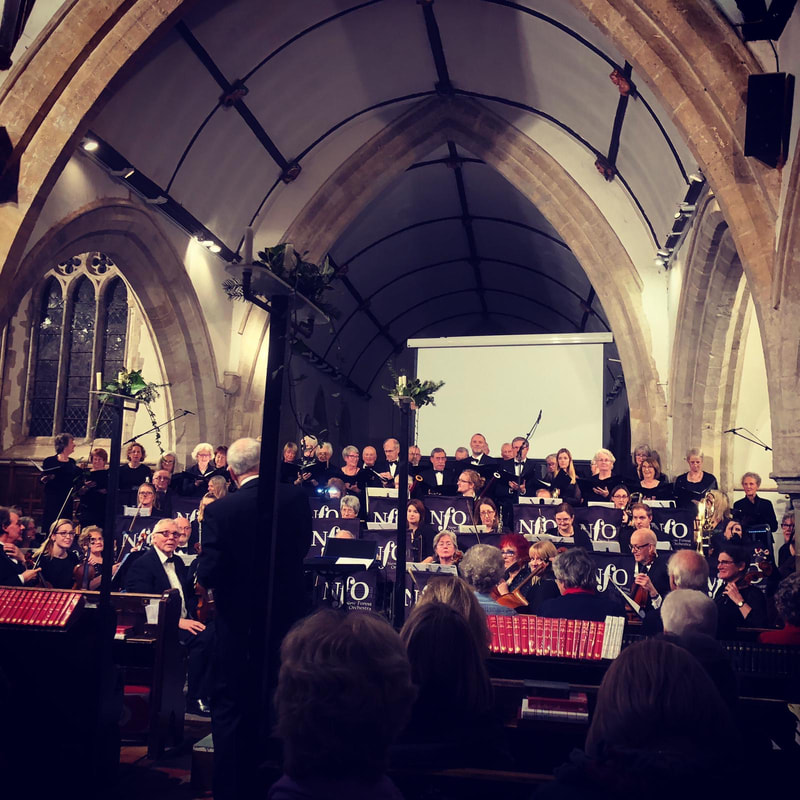 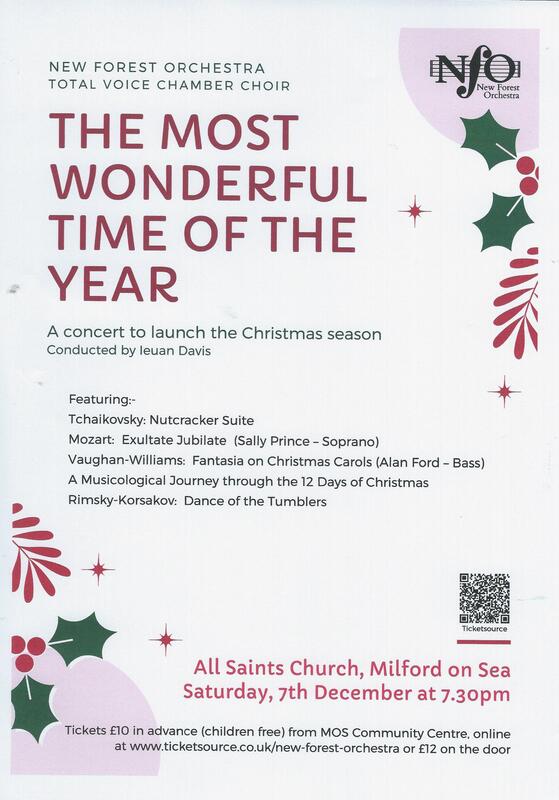 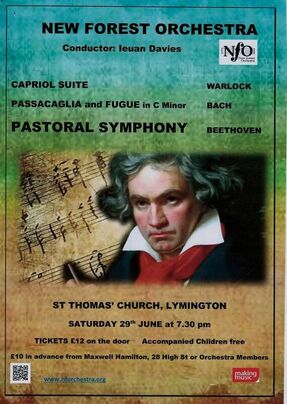 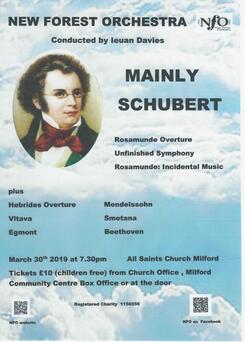 A wonderful evening filled with the music of Schubert - the Rosamunde Overture, his Unfinished Symphony and Rosamunde Incidental Music. The programme also included Mendelssohn's Hebrides Overture and Smetana's Vltava, finishing with the powerful Egmont Overture by Beethoven. 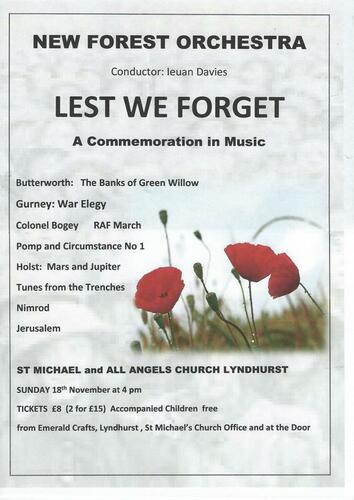 A remembrance of the End of the First World War.

This evocative concert marking the centenary of the end of the First World War featured the beautiful "Banks of Green Willow" .  Butterworth was shot on the Somme in 1915 , a few weeks after winning the Military Cross.  There was also a rare performance of the powerful and intensely moving "War Elegy" of Ivor Gurney, gassed and shell-shocked during the war. Gurney's mental health deteriorated after the war and he spent from 1921 until his death in 1937 in a Mental Hospital. The score lay dormant and undiscovered for nigh on 80 years until realised and edited by Philip Lancaster and Ian Venables of the Gurney Society. Some of the more popular and jingoistic fare followed.

PACK UP YOUR TROUBLES
Saturday 3 November 2018
The New Milton Memorial Centre, New Milton
​
The Concert recalled  what New Milton was like in the four years of war from 1914 until 1918, through the medium of music, song, poetry and sketches.
The second half of the concert  followed  on the theme from the first part and culminated with audience participation in a "Last Night of the Proms" rousing finale with strong voices and much flag waving - all led by The New Forest Orchestra.
​
This Production of "Pack Up Your Troubles" focusing on New Milton and the surrounding area, has been put together by local people, was directed and staged by local people and the cast consisted of mostly local people. 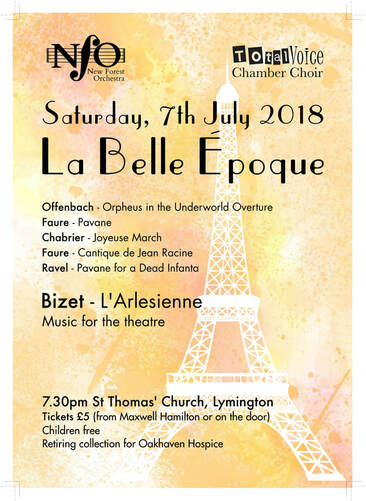 La Belle Epoque refers to the age of optimism, prosperity and innovation which followed the Franco-Prussian War in 1871 until it was shattered by the start of the First World War in 1914. Although these elements were present across Europe and the USA, it was in France, particularly, that innovation and experimentation blossomed. Paris and France saw the development of Post-impressionism, Salon music, light Opera, Art Nouveau and Cubism, Modern Dance and Ballet, Literary Realism, Cafe Society and Bohemian life, Cabaret, Burlesque and Music Hall (such as at the Folies Bergère and Moulin Rouge) and even Haute Couture.

Offenbach's light opera Orpheus in the Underworld ,  featured the Galop, associated later with the ubiquitous Can-can, and some delicious melodies parodying  the characters in Gluck's earlier opera . Chabrier’s popular Joyeuse Marche of 1888 does what it says on the tin!   The Pavane and Cantique de Jean Racine are, together with his Requiem, the most well-known works by Gabriel Fauré.  The Cantique was composed when Fauré was just 19 but not published until the mid 1870s. It exists in various forms but most often featuring a choir and organ or orchestral accompaniment. The Pavane dates from 1887 and is often heard, as Fauré intended, as a purely orchestral piece.  Maurice Ravel, a pupil of Fauré, composed   Pavane pour une Infante Défunte (Pavane for a dead Infanta)  as a piano solo, but it was later published with a sumptuous orchestration. Gracious and stately, the piece was described by Ravel as "an evocation of a Pavane that a little princess (Infanta) might, in former times have danced at the Spanish court.
​
L’Arlésienne, by Georges Bizet, comprises incidental music written to accompany  Alphones Daudet’s play of the same name in 1872. The play is set in Provence, and concerns a young man torn between two loves, a gentle young woman from the countryside and an infatuation with a  seductive charmer from Arles. When the woman from Arles, who never actually appears on stage, proves to have been unfaithful, the young man attempts to console himself by returning to his country sweetheart. He is, however, unable to forget his other passion and so, lost in despair, he takes his own life. Our conductor Ieuan Davies has developed a concert version of the music which incorporates some of the original chorus and incidental melodramas in addition to the more usually heard orchestral Suites later extracted from the score.

The Concert was attended by a large appreciative audience.   Narrator , Alan Ponting, delivered a moving telling of the tale , both of the play and some of the regional and local customs and background utilised by Bizet in his score
​
Slideshow below : photos courtesy of Alec Osborn 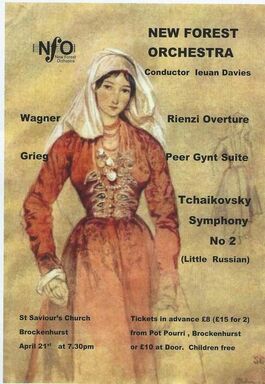 The Tchaikovsky Symphony was the real highlight of a splendid evening.
Tchaikovsky was going through a difficult  time when he wrote his second symphony. He was on holiday at his sister's house in the Ukraine when he heard the butler singing folk songs. These melodies formed the cornerstone of this joyful symphony, which was successful right from its premiere. 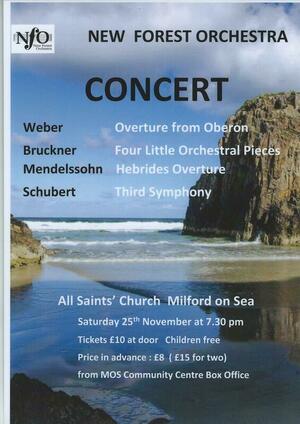 Precocity, brilliant facility in composition  and orchestration and early death are characteristics  of three of the composers (Weber , Mendelssohn and Schubert) who  featured in the concert. Weber’s  thrilling overture “Oberon” started the programme. This overture demonstrates what a master of orchestration Weber was.  Oberon is the King of the Fairies and has injudiciously made a vow that he won’t be reconciled with his wife Titania until he finds a couple of faithful human lovers – apparently a difficult task!

​Bruckner was described by one biographer as “half-simpleton, half-genius”.  Compared with the other featured composers he was a late developer. He worked as a schoolmaster and organist before trying his hand at orchestral composition relatively late. His “Four Little Orchestral Pieces” were composed as exercises for his teacher when he was 38. They are charmingly simple compared with his later complex symphonies. The first performance took place in 1924, over 60 years after their composition.

Mendelssohn on the other hand, like Schubert, was a precocious and prolific composer from an early age. His Octet and “Midsummer Night’s Dream, both composed when he was a teenager are testaments to his invention.   The first of  ten visits to Britain took place in 1829 and  included a trip to Scotland where he visited Staffa.  He wrote a note to his sister Fanny of visiting Fingal’s cave and of the ideas that came into his head for his Hebrides Overture – one of his most enduringly popular pieces.

Schubert , by the age of 18 had already written numerous songs , chamber works and two symphonies. During 1815 he wrote 20,00 bars of music including Symphony No 3.  This symphony starts with a slow introduction with woodwind solos leading into a brisk Allegro. The two middle movements are marked Allegretto and Minuet and Trio. The final movement , marked Presto is a spirited romp.

At the time of Schubert’s premature death in 1828 at the age of 31 some of his works (mainly songs and chamber music ) had been published but many manuscripts remained in drawers and filing cabinets of friends , relatives and publishers. Following a visit to Vienna in 1867 by Sir George Grove (musicologist) and Sir Arthur Sullivan, more of his works became published and better known. It is thought that the first public performance of Symphony No 3  took place in London in 1881. Brahms and Dvorak both championed Schubert’s works.

Our 'Fly on the Wall' Reporter: comments heard from the audience
‘it’s nice to hear different music’
‘lot of work there, I wonder how long they take to rehearse it’
‘they’ve got a lot of musicians haven’t they?’
'that was fast and very intricate, lovely’
‘pity you can’t see the man at the back playing’
‘aren’t we lucky to have an orchestra like this coming here’
‘some of them aren’t that young to be playing all this time!' 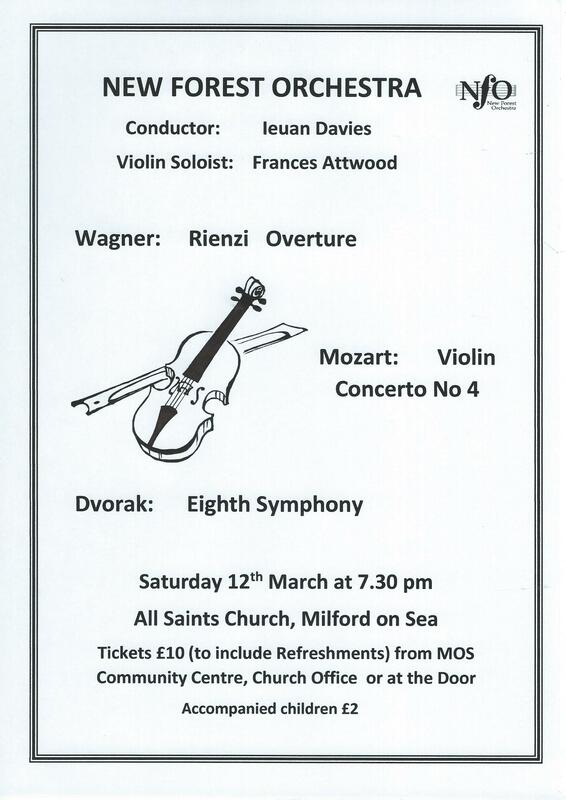 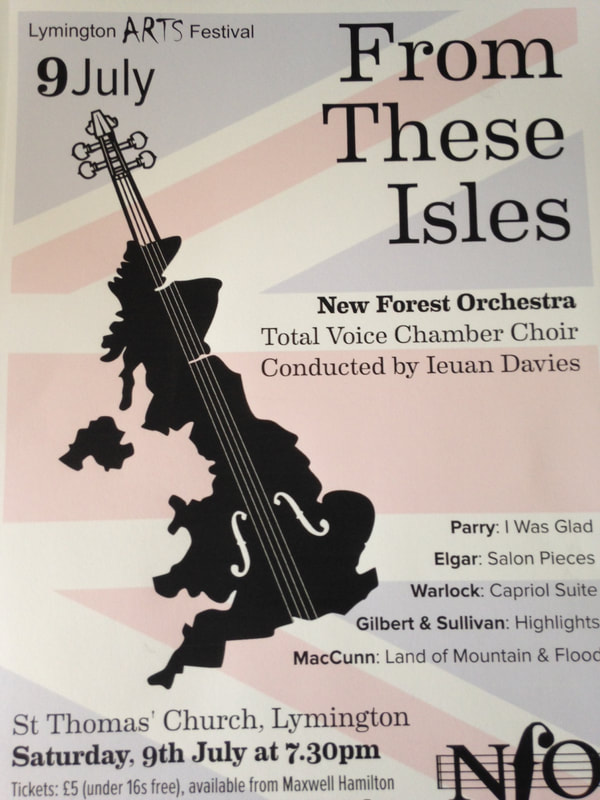 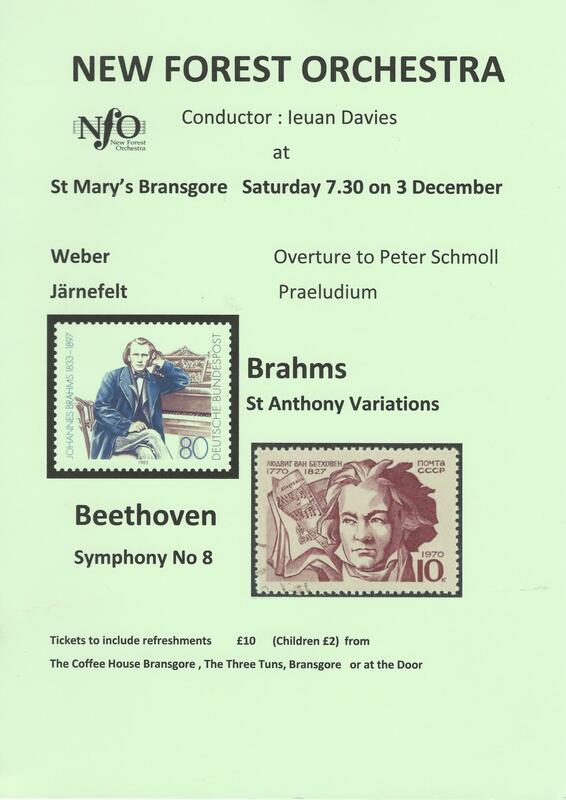 Photographs in Slideshow below courtesy of Alex Magill
4